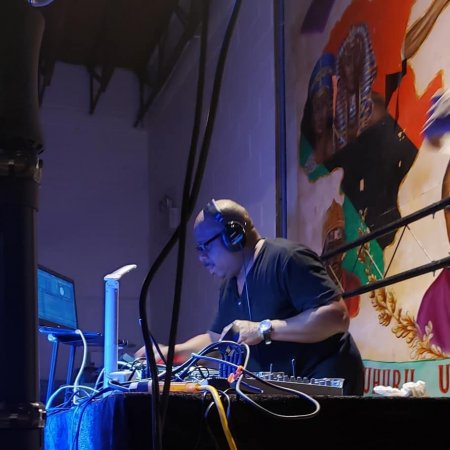 Eric Abramson (AKA Eric Prince, DJ Prince E) was first musically influenced by his grandmother who played Calypso and Motown, and his uncle Antonio Abramson who played percussion for Mongo Santamaria and his son Monguito. He experienced the beginning of the Hip-Hop movement first hand as he grew up in Harlem. In 1975 he started making pause mix tapes. His first residency was at an after hour space called Ja-Gazzy which they soon found out was owned by Harlem Gangster Nicky Barnes.

Eric started doing gigs on his own in other underground Harlem spaces such as The Tradewinds, This Bitter Earth, and The Uptown Underground.  At the age of 17, he was one of the top underground DJ's in Harlem. He was a member of one of many crews called "fantastic four" at the time, and he was the Dj for King Tim who went on to record the first ever hiphop track on vinyl for the Fatback band. Eric was also asked to do studio work for some of the local record label owners such as Bobby Robinson (Enjoy Records), Paul Winley (Winley Records), and Oscar Richardson AKA Flaming King (PMP Records). Eric cites his first time of hearing Larry Levan at the Paradise Garage as having completely redefined his understanding of what a Dj is.

During the 90's Eric taught and mentored other DJ's and kept producing local artists. During this time he was introduced to Bobby Davis Jr, the founder of the first ever African American music Dj pool, out ot the Bronx in i978, Spinners Unlimited Recording Enterprises (S.U.R.E.). Eric suggested to Bobby that SURE could be moved online and secured the name surerecordpool.com for Bobby. In 2004 The online version of SURE Record Pool was up and running. It has serviced DJ's from around the world ever since. Eric took over the day to day operations of SURE to honor the memory of Bobby Davis who passed away in december 2010, which he still does to this day.

Eric Prince still performs at occasional special events. He has also been doing a musical podcast for over ten years which can be located at http://ceedoggpresents.blogspot.com/

We are understandably immensely gratefull that he has agreed to be our special guest at 4 years Dub Intervention.

Corin Arnold, Ed2000, has been Djing for 40 years.. He has fullfilled well over 4000 dj bookings in dozens of countries during that time. He currently has a regular show at Cashmere Radio Berlin, and is resident Dj in Gretchen and Der Weisse Hase where he showcases the Dangerous Drums collective events that he co-runs, and Eschschloraque where he presents his Dub Intervention project.