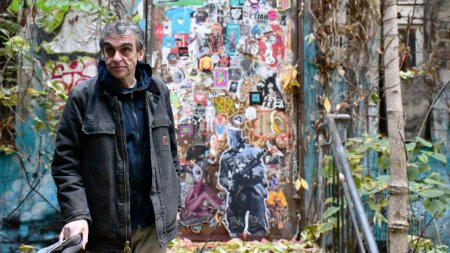 Born in london 57, corin has been working in music subculture since 75 . Active in Londons punk scene in the late 70s & the protorave scene in the mid 80s, he moved to Berlin may 1989. He was gifted the Dj name Ed2000 by The Mutoid Waste Company multi media artist group at an arts symposium in a former Monestary in Plassey in 1991..Earth Dream 2000 is the belief that the current  millenium will bring about a better world for our children and their children and that is what Corins Dj name stands for.
"you have to believe, no one said it would be easy!"

He has played clubs festivals and off locations worldwide (China, Russia, Usa, Indonesia , Europe wide and most often in Japan). with a non stop radio presence since 1994 he has worked in most relevant musical genres in a career spanning 45 years. Currently, Dub Intervention, which he presents together with project partner Eduardo Delgado lopez (Educador) as both a Radio Show and Live Dj Performance is his main focus of attention together with a monthly show on Berlins Cashmere Radio (Dreamtime).
he also gives weekly  Dj Subculture workshops to students aged from 14 upwards, an initiative from the "Generation Warriors" project.
Corin is currently resident in Eschschloraque, 260grad, Deck5 and Der Weisse Hase in Berlin.
Occasionally when needs be Dub Intervention is presented by one of the team: Such is the case on Saturday 30th at eschschloraque